You are here: Home1 / Newsletter Articles2 / Ready for the Future … What Does It Mean to Mentor a Foster Chil... 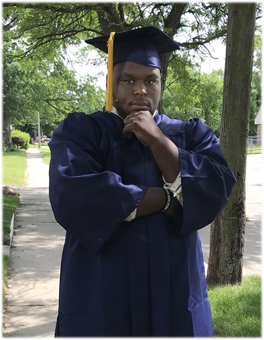 “Some people are in the lives of foster kids because they have to – literally or otherwise. A mentor chooses.”

Many teens graduated this past June. But when Charles grabbed his diploma there was someone special in his corner, a mentor named Ken Rice. Here he tells what being a mentor has meant to both of them.

Charles had been a ward of the State of Michigan since he was five years old when the parental rights of his mom and dad were terminated.  He has been moved in between a half a dozen boys’ homes and at least two foster care placements since then.

Charles dealt with bullying, depression, anger, and loneliness all while trying hard to find adoptive parents who would be his forever family.

I met Charles when we began hosting meet-and-greets during my former career with Wendy’s. We had all 12 of the Wendy’s franchised restaurants that I oversaw get kids who wanted to be adopted, together with possible adoptive parents. We would have them play games and feed them in a relaxed fun atmosphere where they could get to know each other.

This was at one of those events. Charles was full of energy and had a great big smile. I had a Wendy’s mini football and the game began. It became a regular occurrence over the year for Charles and me along with other kids to play a game of football during the events.

“Though I wanted to be more involved in his life, I wasn’t in a position to adopt or be a foster parent.”

Then I learned I could be his mentor. We began meeting for church on Sundays then going off for some activity afterward. Sometimes we just talked on the phone.

There were so many people going and coming in and out of Charles’ life, it was tough for him to create good relationships. I wanted to be a consistent part of his life. Everyone needs someone who is there for them.

“You can give 1/2 day or a day each week. But keep it consistent. Really should reach out each week. Charles became part of our family – attending church and family functions.”

What I never realized was how much I would learn from Charles. I learned somewhat how it feels growing up in an institutional setting where you can be moved constantly, how different it is growing up as a young African American boy, teenager and now man and how much having someone you can trust and depend on means.

“If you ever thought to make a difference in someone’s life and they in yours, give mentorship a try and see what love can do!”