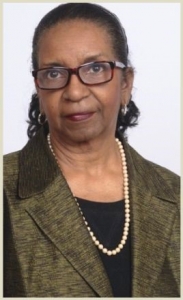 Verna S. Green,  Member of Spaulding for Children Board of Directors

A longtime and active member of the Spaulding for Children Board of Directors, Verna S. Green is the driving force behind Families in Bloom. The community focused event was held in April at St. John’s Banquet & Conference Center in Southfield. Ms. Green recently started preparing for next year’s event, tentatively scheduled for Mother’s Day weekend to honor all mothers. Among her goals for Families in Bloom II is for the event to spread awareness of Spaulding for Children and our work in the City of Detroit and throughout the metropolitan area.

While she seldom talks about her own accomplishments, we think you’ like to know more about Ms. Green:

Her eyes reflect the kindness of a grandmother. With her vision, Verna S. Green focuses on success like a CEO.

Ms. Green started her career in the mailroom of Parke, Davis & Company, the pioneering Detroit based pharmaceutical giant. She later joined General Motors Corporation’s Corporate Identity Department, helping administer the standardization of signage throughout the various dealerships and other operating units of the corporation. She was later promoted to GM’s Organizational Development & Research Department.

Committed growing personally and professionally, Ms. Green completed a Bachelor of Science in Management and Labor Relations from Wayne State University. She continued her education, earning a Master of Business Administration in the Advanced Management Program of Michigan State University.

Seeking to expand her experience labor relations, Ms. Green accepted a position as Personnel Director with the Visiting Nurses Association, where she negotiated the organization’s first collective bargaining agreement with the newly formed nurses’ union.

She continued her transition from the automobile industry to the health care industry with a career move to what was then known as “The Health Care Institute of Detroit” in Detroit’s Medical Center, where she had a dual management role in marketing and patient information system management.  “It was a great experience working with president of the organization, a physician who understood organizational development and management.”   The organization, however, was later absorbed into the outpatient services of what is now Detroit Receiving Hospital.  In that new entity, Mrs. Green became the Director of Recruitment and Management Training & Development.  Along the way, Ms. Green became acquainted with a coworker whose husband was president of Booth Broadcasting Company, the owner of WJLB-FM.

“She knew about my background in human resources management,” Ms. Green said. “One day, she mentioned that her husband was dealing with some interesting employee relations issues at the station, primarily how to deal with new rules regarding maternity leave. Over the months, I provided her with some suggestions that she passed on to her husband.  The questions and answers expanded to additional discussions regarding operational concerns and several in-person meetings/consults and eventually a job offer to become the general manager of WJLB-FM, call letters that are the monogram of its founder, John Lord Booth.

“It was a great experience.  Our team was able to revitalize the station and take it to a number one position in audience ratings.  Equally important, we were able to maximize those ratings with advertising revenue.”

Ms. Green would serve as Vice President and General Manager for almost 19 years. She said her approach was to utilize the radio station to actively demonstrate concern for the needs of the City of Detroit. In addition to sharing information, views and music, the station helped raise public awareness of important issues that weren’t always explored in general market news.

“In the early ‘80’s, Detroit was really suffering,” Ms. Green said.  We were surprised to learn that a surprising number of school children in Detroit did not have sufficient winter wear and would either miss school on intensely cold days or would come to school with dangerously light-weight outerwear.

“At the radio station, we decided to enlist the public’s help to provide coats for children who needed them. We launched ‘Coats for Kids.’” Ms. Green said. “What we found was that the need for warm clothing was so great that adults also were coming in for coats. So, the project became huge. We had thousands of new and like-new coats in our inventory. At one time, we were storing – and dry cleaning – more coats than any department store in the city.”

Around that time, 1999, Ms. Green met local vocalist and co-owner of a Detroit jazz club, the late Ortheia Barnes, who had been working as a volunteer with Spaulding for Children. Soon, Ms. Green joined in the work. She would formally join the board several years later with the encouragement of the late John Barfield.

“We talked about the need so many children have, to be part of a loving family,” Ms. Green said. “Spaulding is an organization that really cares about families and children. It has been very exciting to see Spaulding grow and become more widely known. Spaulding today has a national reputation for its expertise in adoption and foster care. We as a board are constantly aware that Spaulding could benefit from having greater organizational visibility in more areas in the Detroit metro.  Spaulding board members and staff are eagerly working on making that happen.”