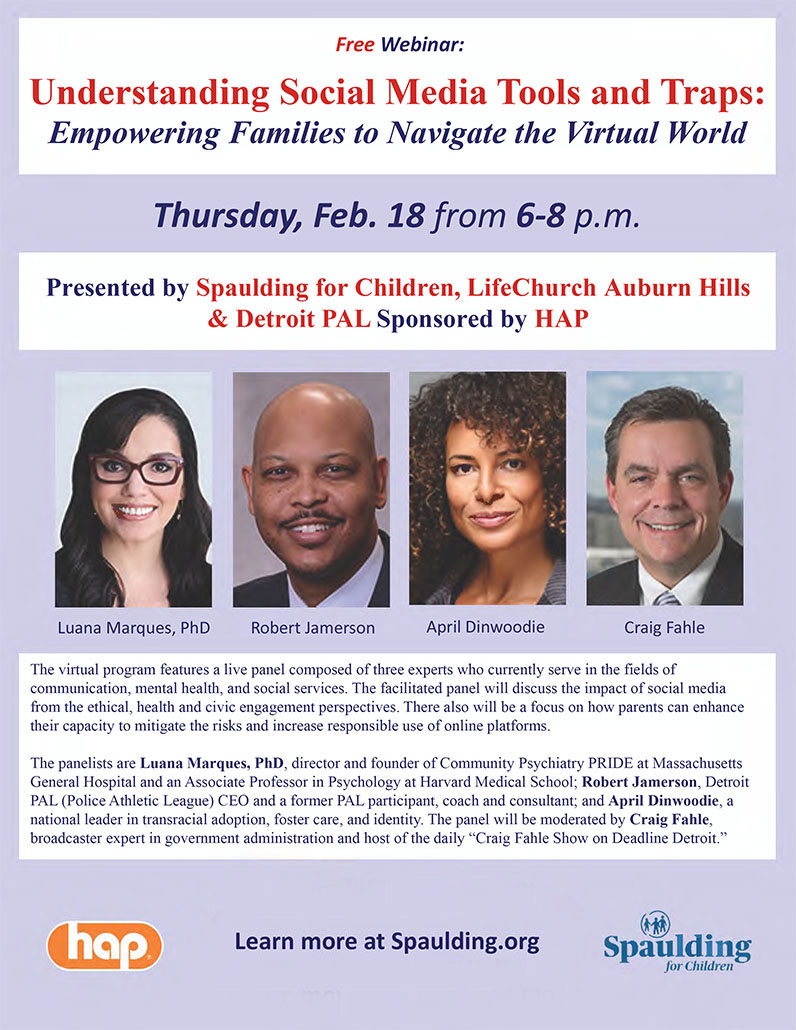 Dr. Marques is the director and founder of Community Psychiatry PRIDE at Massachusetts General Hospital and an Associate Professor in Psychology at Harvard Medical School.  Dr. Marques is the president of the Anxiety and Depression Association of America. The topics she will address include:

Mr. Jamerson is Detroit PAL’s CEO and a former PAL participant, coach and consultant. Mr. Jamerson has devoted more than 20 years working for corporations, such as Pfizer, Inc., before joining the nonprofit sector. He has held a variety of leadership positions in marketing operations, sales and training. Among the topics he will address are:

Ms. Dinwoodie is a communications and cause-related marketing and social media professional who is passionate about how people experience and interact with brands. Ms. Dinwoodie is a national leader in transracial adoption and a national consultant focused on adoption, foster care, family, identity and navigating differences of race, class and culture. Among the topics she will address are:

Craig Fahle is the host of the daily “Craig Fahle Show on Deadline Detroit.”  Previously, he spent four years as Director of Public Affairs for the Detroit Land Bank Authority, where he was responsible for marketing and communications, media relations, and customer service. Prior to joining the DLBA, Craig spent more than twenty years as a public radio journalist.

He has worked at NPR affiliate WDET-FM in Detroit, NPR affiliate WFAE in Charlotte, NC, and at the Michigan Public Radio network in Lansing, Michigan. In his time at WDET, he was a reporter, news anchor, editor, talk show host, and finally General Manager for programming. He was assistant news director at WFAE, and was the State capitol correspondent for the statewide Michigan Public Radio network.

Craig has won numerous awards for both his reporting and his daily public affairs program, “The Craig Fahle Show”, which aired for seven years on WDET. Craig’s career has been spent interviewing newsmakers, including artists, musicians, authors, politicians and public officials; which included interviews with six Detroit Mayors, and six Michigan governors. Over the course of his talk show, Craig conducted more than ten thousand interviews.